Winner of the 2020 Martin Adler Prize

Based in Palestine
Nominated by Middle East Eye 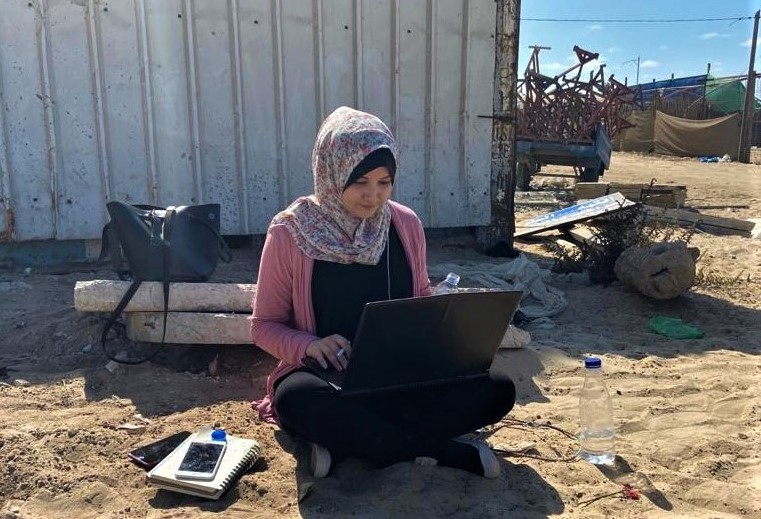 “Many stories about everyday life inside Gaza, one of the world’s most inaccessible territories, go untold. Maha Hussaini sees it as her responsibility, as a Palestinian journalist living under occupation, to highlight the trauma faced by the population, including human rights abuses and contraventions of international law. To do this, she has had to overcome restrictions on her freedom of movement, conservative attitudes within Palestinian society, the risk of injury, and the problems of everyday life in Gaza. Hussaini has now made a name for herself as one of Gaza’s most notable reporters. As one of the few female Palestinian journalists in the territory, she often faces prejudice from some of the more conservative sections of society: asking difficult questions, making investigations and reporting on events are too often regarded as the sort of work that’s only suitable for men.”

Read some of Maha’s work from Middle East Eye:

Maha Hussaini, who was born in Cairo, grew up in Gaza City. She studied at the Al-Azhar University in Gaza, where she was awarded a degree in English and French Literature in 2013. She also holds a master’s degree in Political Science: Refugee Studies, awarded in 2019 by the same institution. After graduation in 2013, Hussaini initially taught English. In July 2014, she began working as a freelance journalist for the Gaza-based White Media agency and Sahar TV, producing, preparing and presenting reports during Operation Protective Edge, the Israeli attack on Gaza, which resulted in the deaths of more than 2,000 Palestinians and more than 60 Israelis. Hussaini has since covered events in Gaza, including the ongoing dispute between Fatah and Hamas, Palestinian reaction to the relocation of the US Embassy to Jerusalem and the Great March of Return.

In August 2014, she was appointed as the Gaza-based media officer for the Euro-Mediterranean Human Rights Monitor (Euro-Med Monitor), based in Geneva. Two years later, she was appointed regional office director, a position she held until December 2018. Aside from working for Middle East Eye, Maha works as an executive director for the London-based think-tank ImpACT International for Human Rights Policies. She continues to work with Euro-Med Monitor, serving as a board trustee and member of the board of directors, as well as a supervisor for HuMedia, its media platform.

“Her stories leapt out at me immediately, because it’s such a long running story – but she gave it a freshness and humanity. The way she delivered them, given all the problems of working in Gaza and being a woman in a predominately male, conservative environment, is incredible. The originality of her storytelling, the way she writes, her skill in describing people, place & condition to convey the whole story is supreme. There are some lines in those stories that will stay with you forever.”